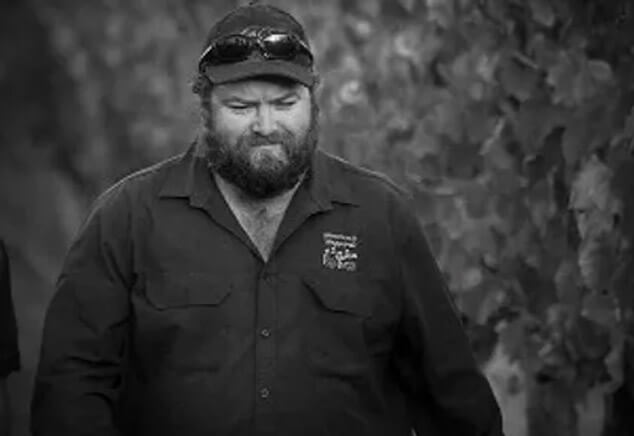 Adrian Hoffmann, affectionately known to all as Hoffy, is regularly touted as the man who grows some of the best Cabernet in the Barossa. High praise indeed! His family have been landowners in the Barossa since 1857, making him a sixth-generation grower, which gives a provenance in the area that few can match. One of his fondest memories of the vineyard was when four generations were picking grapes together, side by side. Adrian’s grandfather Gordon, his father Jeff, himself and his son.

We came into contact with Hoffy on the hockey pitch a couple of years back, playing around Nuriootpa. Turns out Hoffy’s talents aren’t limited to grape growing – he’s a mean goal shooter too! Most of the time, however, Adrian is tending his vines or making wine.

His 120 hectares of vines lie in Ebenezer, in the northern end of the Barossa. There are distinct differences from north to south, in both soil and climate: in the north, in Ebenezer, the red earth is very distinct – well-drained sandy clay loam over a solid limestone, which Adrian describes as perfect for growing Shiraz. “Mean” he says, so the vines have to dig deep for water and, as a consequence, produce dense, concentrated wines jammed with character. Climate-wise, this northern end is the warmest part of the Barossa, too, with low rainfall, which only adds to the intense colour and ripe fullness of the wines its fruit produces.

As Director of Dimchurch Vineyards, his own wine estate, Adrian manages 120 hectares of vines, growing an impressive array of grape varieties: Shiraz, Grenache, Mataro, White Frontignac, Cabernet, Merlot and Zinfandel. In an average year, about 700 tonnes of them. But the thing that makes Adrian’s vineyards unique is his old vines, grown on shallow topsoil over deep clay. Most of his more recent plantings are cuttings of these old vines, creating a unique lineage in the vineyard. Bet you’ve never thought of vine lineage before!

He has a few funny stories up his sleeve: one picker who came to help, a naturist in her spare time, who challenged Hoffy to a harvesting race. Of course, he filled his bucket the fastest and her penalty (chosen by herself) was to run around the vineyard naked. Nowt as queer as Aussie folk!

Adrian loves the Barossa and is a strong member of the community. He belongs to Wine Grapes Australia, the Barossa Grape & Wine Association, Light Pass Cricket Club (just up the road from RedHeads, in fact), and Nuriootpa Hockey Club, where he met Dan. Adrian is also chair of Grape Barossa and will continue to campaign for the Barossa as a great place to live, work and visit, while also promoting Barossa wine as some of the best in the world.